The history of mammography

From bull-sized X-ray machines to special systems for mammography

All of the stories from the early days of X-ray technology feature brilliant and often even fascinating characters. Their pioneering research was sometimes triggered by an ingenious idea, sometimes by a groundbreaking discovery, and sometimes – as in the case of the radiologist Philip Strax – by a situation in the researcher’s personal life. Strax was a general practitioner running a small practice in Manhattan when he and his family received some shocking news: His wife, Bertha Goldberg Strax, had developed breast cancer, and died at the age of 39 in 1947. Philip Strax resolved to spend his life’s work preventing that kind of shock from happening to anyone else, especially the patient.
In those days, the technique known as mammography (from the Latin mamma, “breast”) was still in its infancy, but the equipment and knowledge available to Strax and and his colleagues were the result of a few decades of development.

Albert Salomon with his daughter, the artist Charlotte Salomon

In 1913, the surgeon Albert Salomon started to examine diseases of the breast by using X-rays. As X-ray equipment was not designed for imaging breast tissue, or at least not without considerable effort, Salomon could only use excised breast tissue in his research. By comparing the tissue with the X-ray images, he identified how diseased tissue spread and how it could be distinguished from healthy tissue, among other observations. He explained the diagnostic principles so comprehensively that subsequent researchers only needed to supplement his work with a small amount of theoretical knowledge. 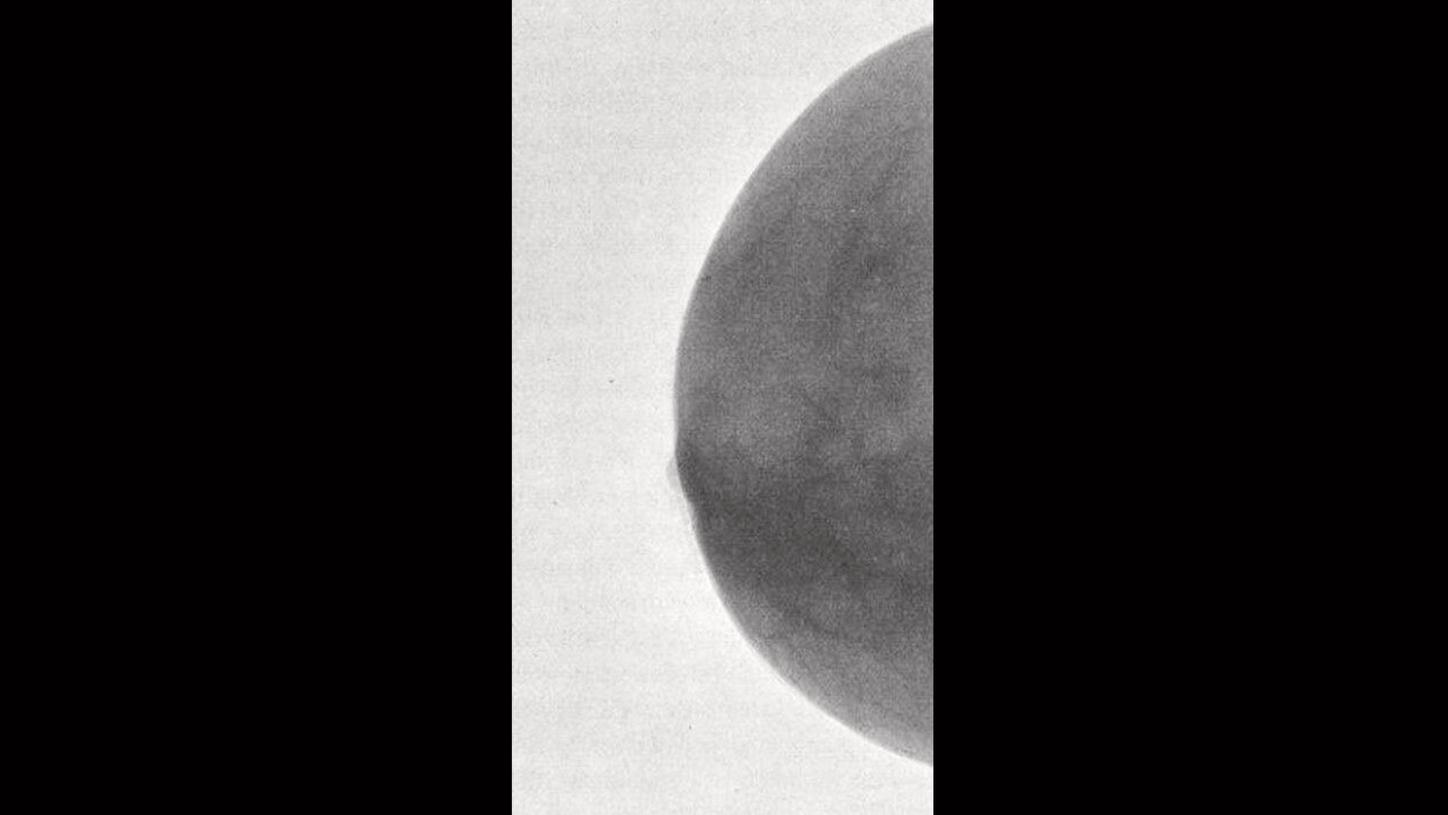 The first known image of the breast tissue of a living patient.

In 1927, the first known image of the breast tissue of a living patient was published by Otto Kleinschmidt, a professor of surgery in Leipzig.

From the 1930s onward, numerous other pioneers laid the blueprint for today’s systems through their insights into and requirements for mammography equipment. In Montevideo, the radiologist Raoul Leborgne realized, among other observations, that breast tumors could spread over a large area without being detectable to the touch. In Strasbourg, Charles Gros improved the image quality by optimizing X-ray tubes for the visualization of soft tissue. In Pennsylvania, an American working group led by Jacob Gershon-Cohen and the pathologist Helen Ingleby demonstrated the importance of mammography in early detection and published the first standard work on the technique. 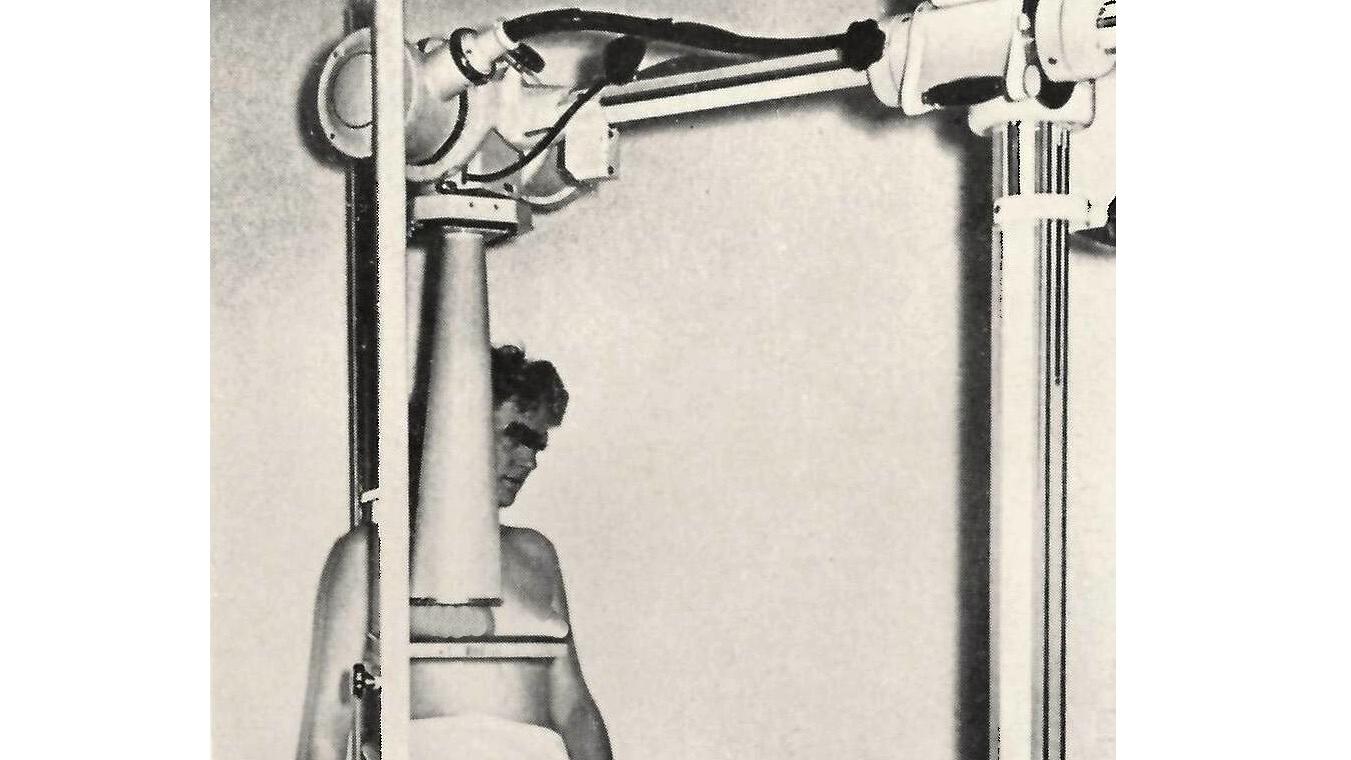 In 1957, Heidelberg University launched a major study that was instrumental in helping mammography break through into clinical practice. A number of technical improvements have paved the way for the more widespread use of mammography. The X-ray machine used at Heidelberg University Women’s Hospital was the Siemens Tridoros IV. Although this equipment was not specifically developed for mammography, the physicians in Heidelberg worked with Siemens to optimize it to meet the exacting requirements of breast imaging with X-ray technology. For the first time, the X-ray tube was fitted with a cone that not only focused the X-rays but also compressed the breast in order to reduce the radiation load and improve detail recognition.

As early as possible

In 1963, Strax and his team began searching for the best way of detecting breast cancer as early as possible so that radical surgery could be avoided. Their research centered around a mass screening of some 62,000 New York women, which represented a huge logistical undertaking right from the outset. Most of the hospitals were in the north of the city in those days, and many women were not prepared to travel the long distances required. Undeterred, Strax began personally calling and writing the women to persuade them to take part. The team eventually outfitted a van with an X-ray machine, parked it alongside the ice-cream trucks and sandwich vendors in Midtown Manhattan, and examined subjects in their lunch breaks.
To allow participating hospitals to perform several thousand mammograms a day, the women were channeled through a carousel-like structure made up of multiple changing cubicles. This process went on all day and late into the evening, and was planned down to the last detail – from the stops on the route to the time that people entered the cubicles and even how much time they had to dress and undress. “To expedite turnover, the amenities of chairs and mirrors [were] omitted.” This was the largest study yet into the benefits of mammography, and it resulted in the timely detection and treatment of tumors in a number of women, with almost 40% fewer deaths from breast cancer among the screening participants than in the control group. An ecstatic Strax wrote: “The radiologist has become a potential savior of women – and their breasts.”

In the mid-1960s, when mammography was still in its infancy, only a handful of highly experienced specialists were using “machines the size of a full-grown bull” to create images of their patients’ breast tissue. This fledgling diagnostic technique required a great deal of skill on the part of the operator and placed extraordinary demands on the technology. Even at that time, however, it was clear that mammography would become an increasingly important tool for cancer screening in the future. With this in mind, a number of Siemens engineers stated in 1971: “We believe it is necessary to develop a special mammography device that allows quick and easy operation while also producing optimum image quality.” The Siemens MAMMOMAT system eliminated the need for tedious configuration and adjustment of the X-ray equipment and featured an X-ray tube optimized for breast diagnostics, allowing physicians to visualize tiny structures in the tissue down to a size of 0.1 millimeters. “With MAMMOMAT, a device [was] now available that, thanks to its easy operation and above all to the high image quality that it [could] achieve and the low radiation load for the patient, [was] suitable for the cancer screening examinations that are generally recognized as urgent.” 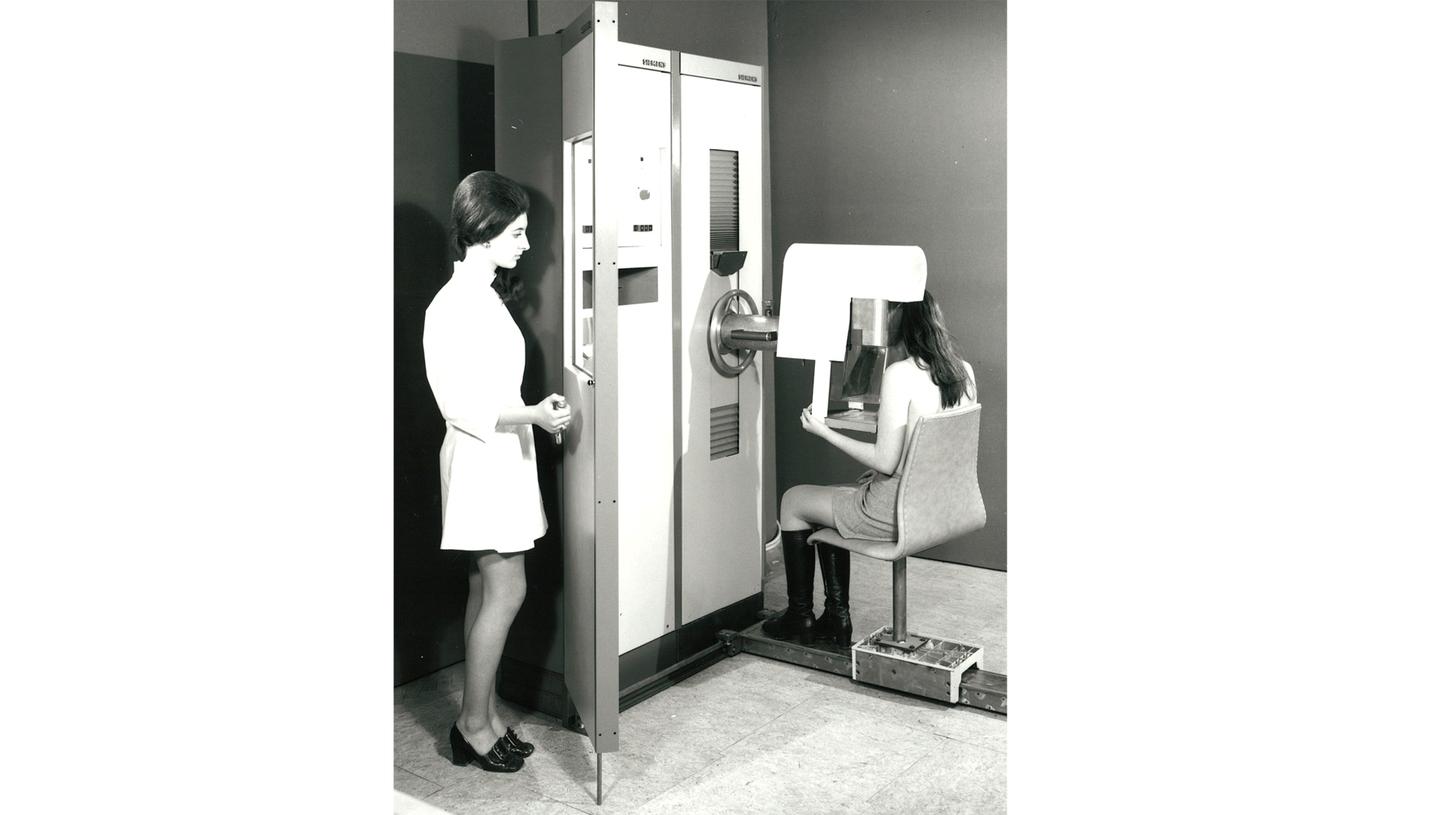 The MAMMOMAT was the first Siemens system designed specifically for examining the female breast. 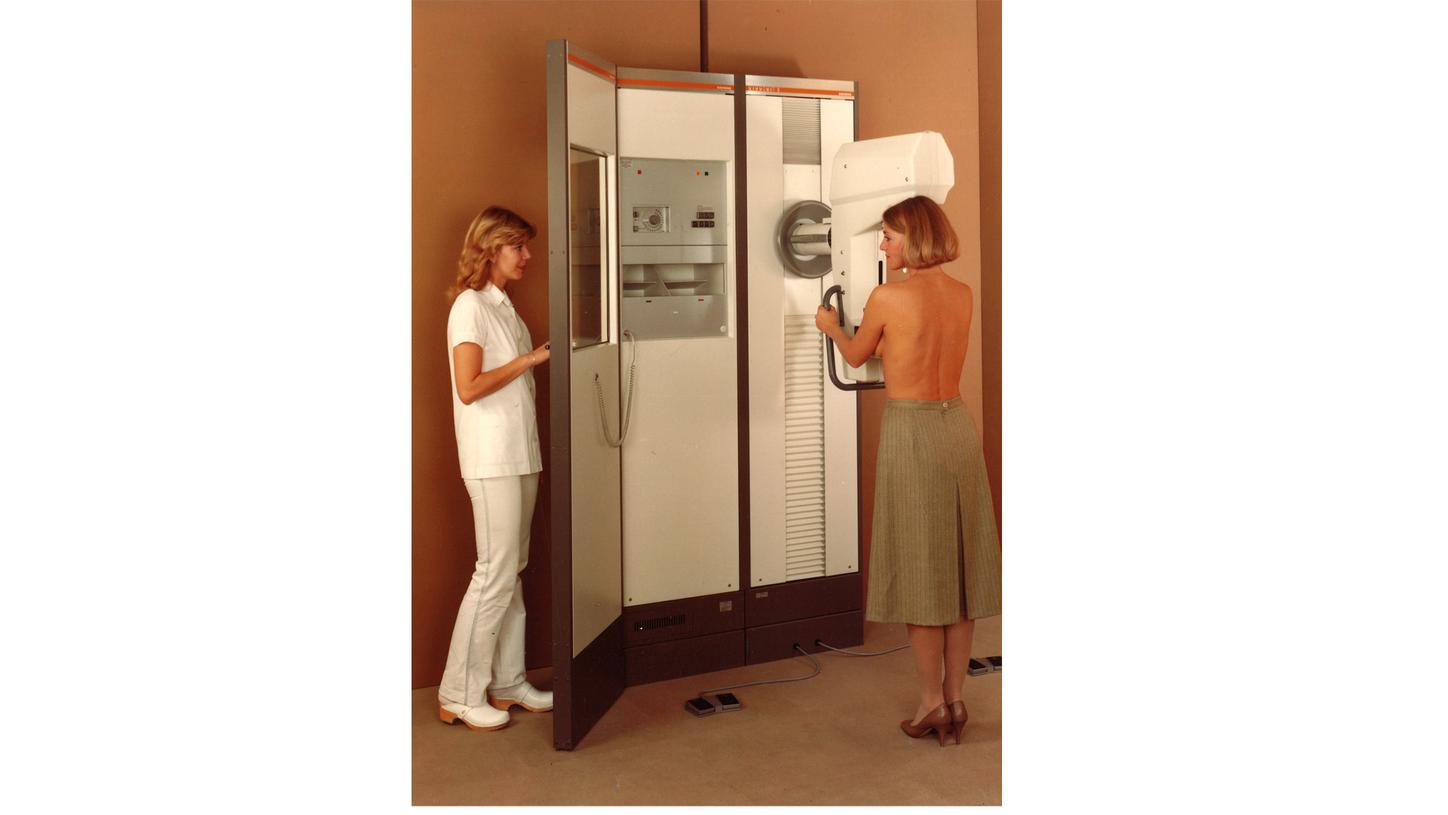 The grid technology in MAMMOMAT B improved image quality in various ways, including by considerably reducing the amount of scattered radiation in the grid and by enabling further significant improvements in contrast and detail recognition in the X-ray images. 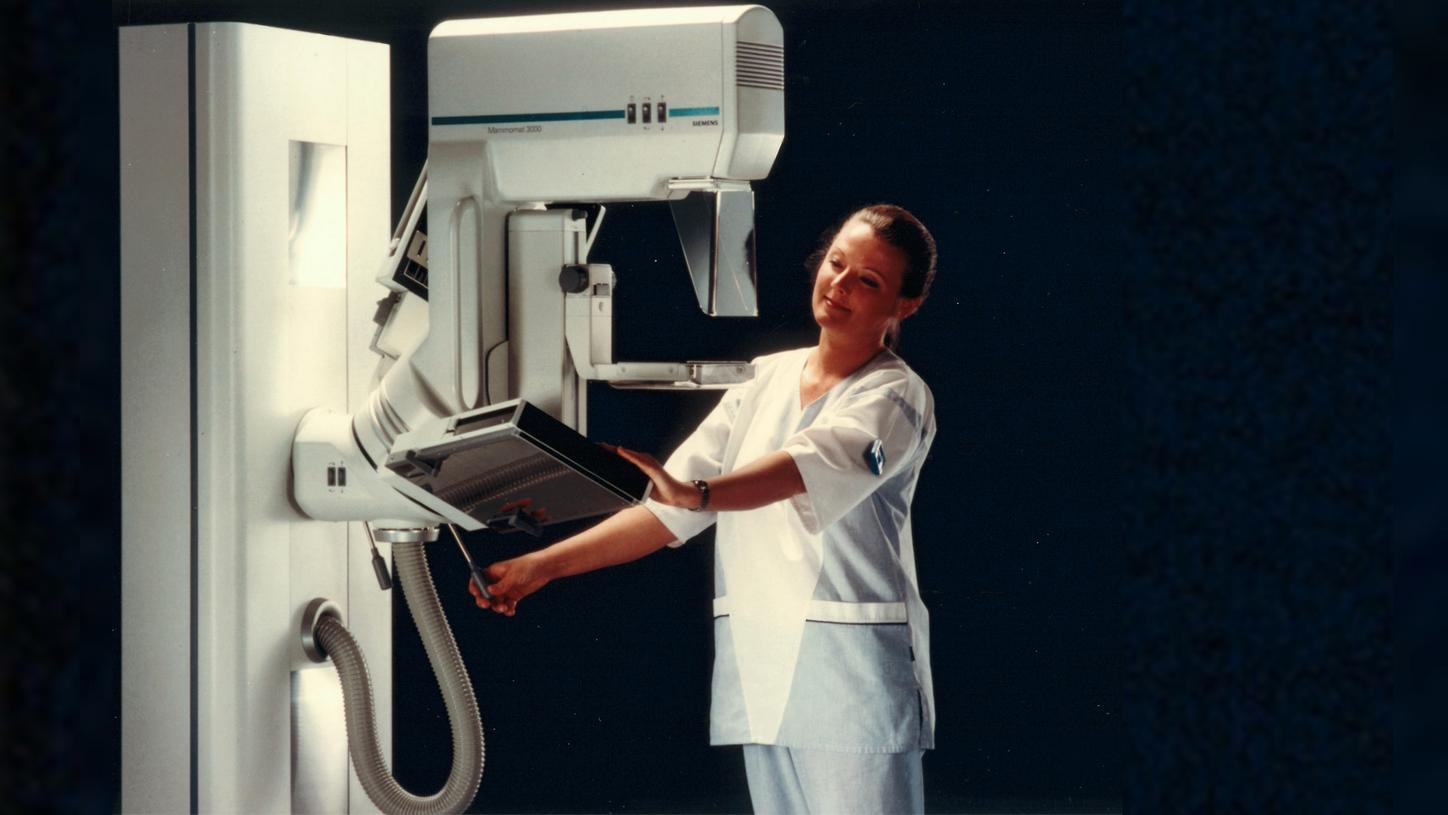 MAMMOMAT 3000 featured a microprocessor that automatically determined the optimum parameters for capturing an X-ray image. For example, its compression system stopped automatically at the point where further compression would no longer improve the quality of the image. This spared the patient unnecessary pain while still offering the physician the best possible image quality. 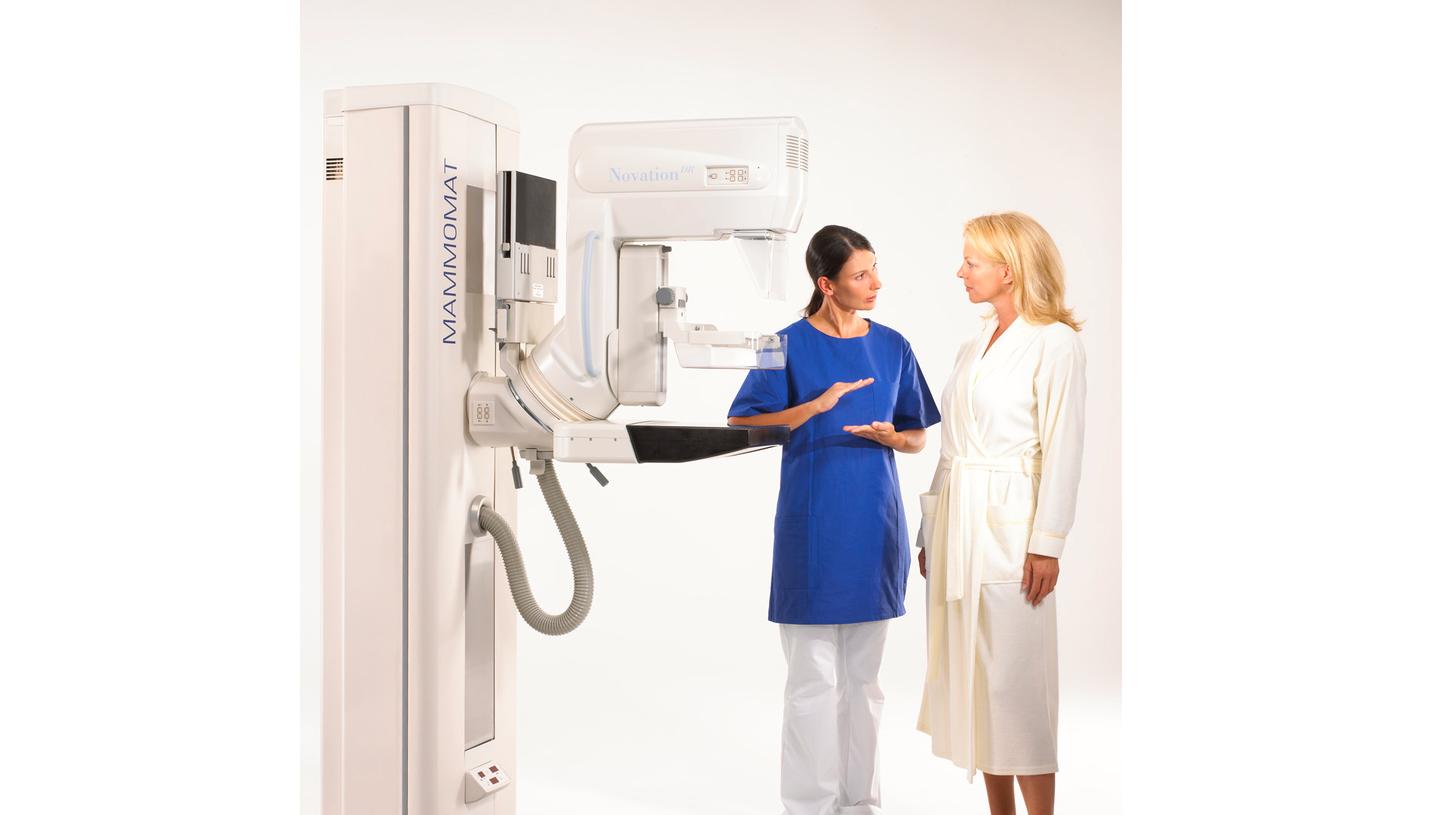 The new generation of digital systems began with
MAMMOMAT Novation. In this system the X-rays were received by a detector that converted the measured values into electrical signals. Once the image was rendered, the physician could assess the results immediately on-screen while the patient was still present, and begin further examinations if necessary. 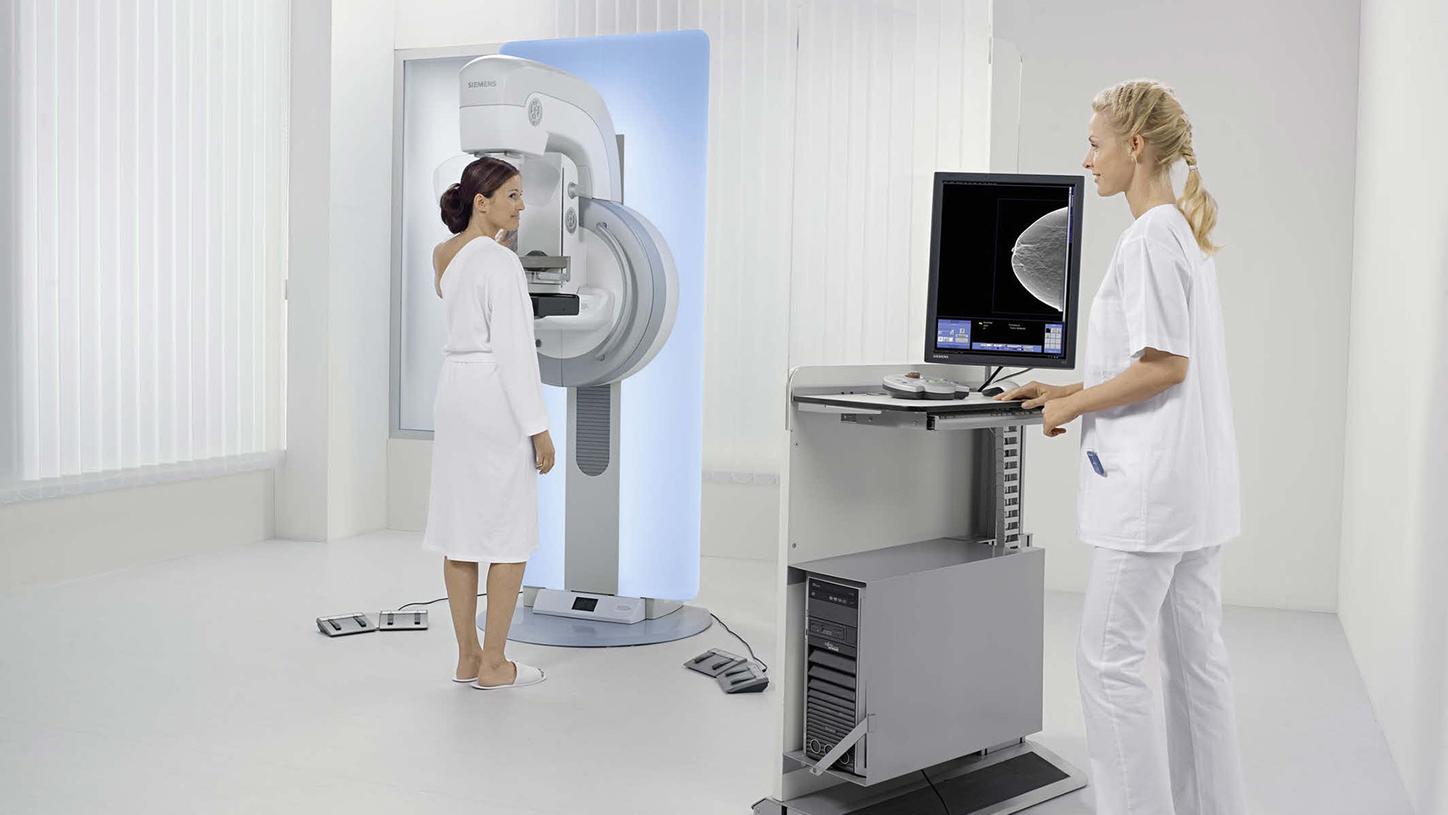 The MAMMOMAT Inspiration is a flexible mammography system for screening and diagnostics and provides a platform for the continuous development of mammography for the next decade. 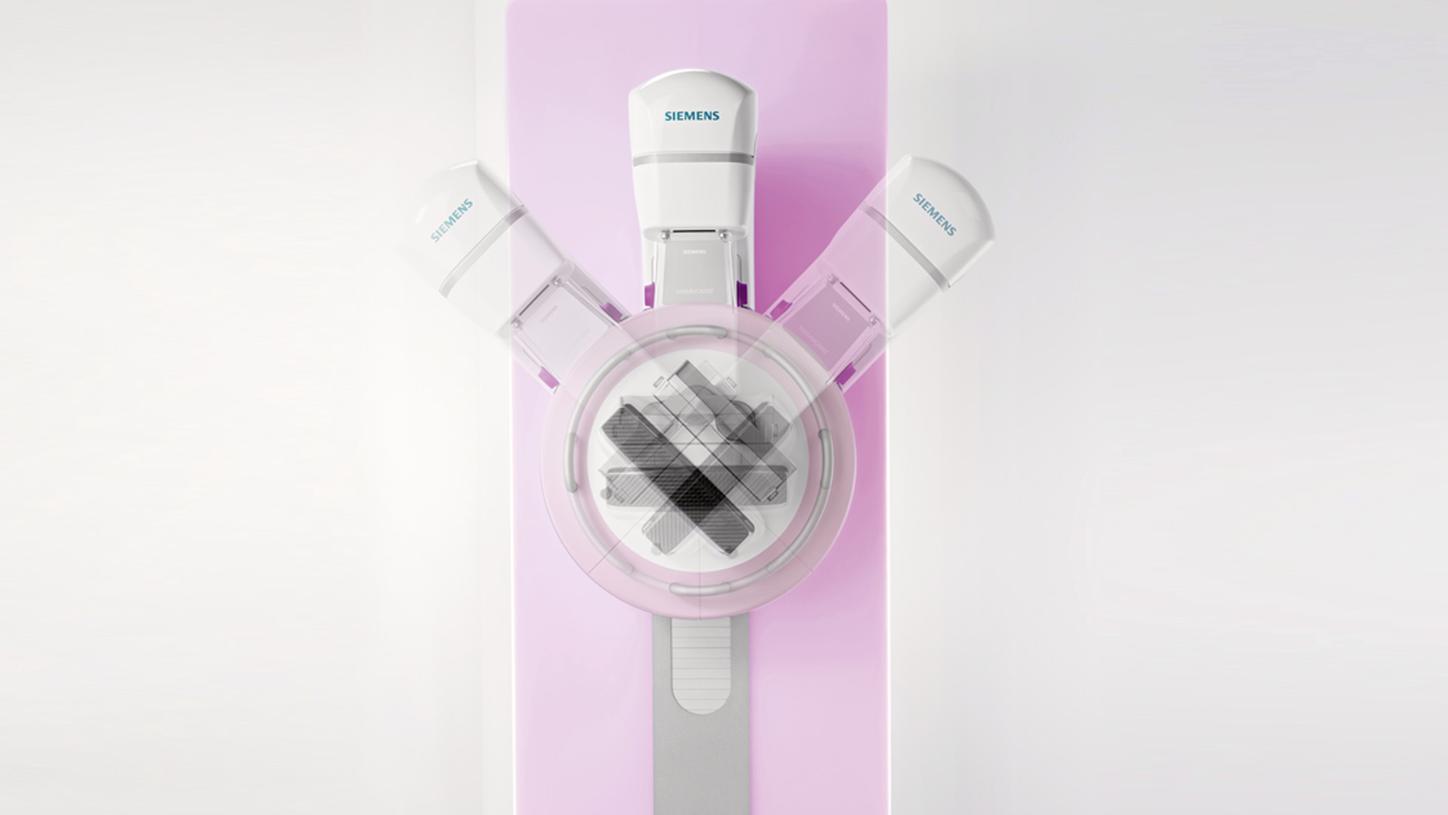 The incorporation of 3D Breast Tomosynthesis into the
MAMMOMAT Inspiration digital mammography platform allows physicians to produce three-dimensional images of the breast. In the system an X-ray tube and the detector rotate around the breast in a 50-degree arc, recording 25 individual images at a very low dose. From this raw data, MAMMOMAT Inspiration generates high-resolution 3D images of the breast that can even reveal tumors that were previously concealed by overlapping tissue. 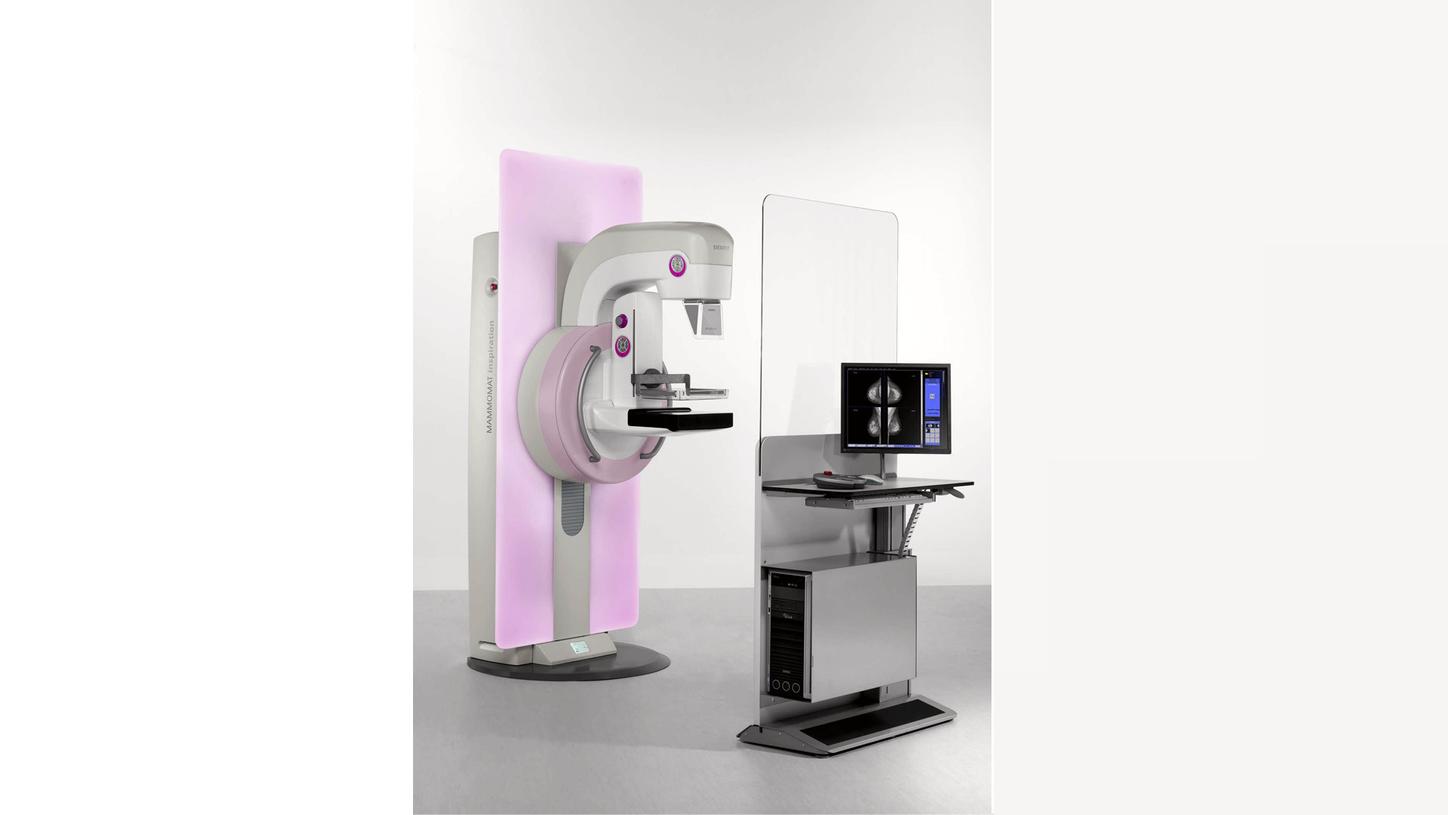 The MAMMOMAT Inspiration PRIME Edition featured a new image correction algorithm that reduced the radiation dose by up to 30 percent while maintaining the same image quality. 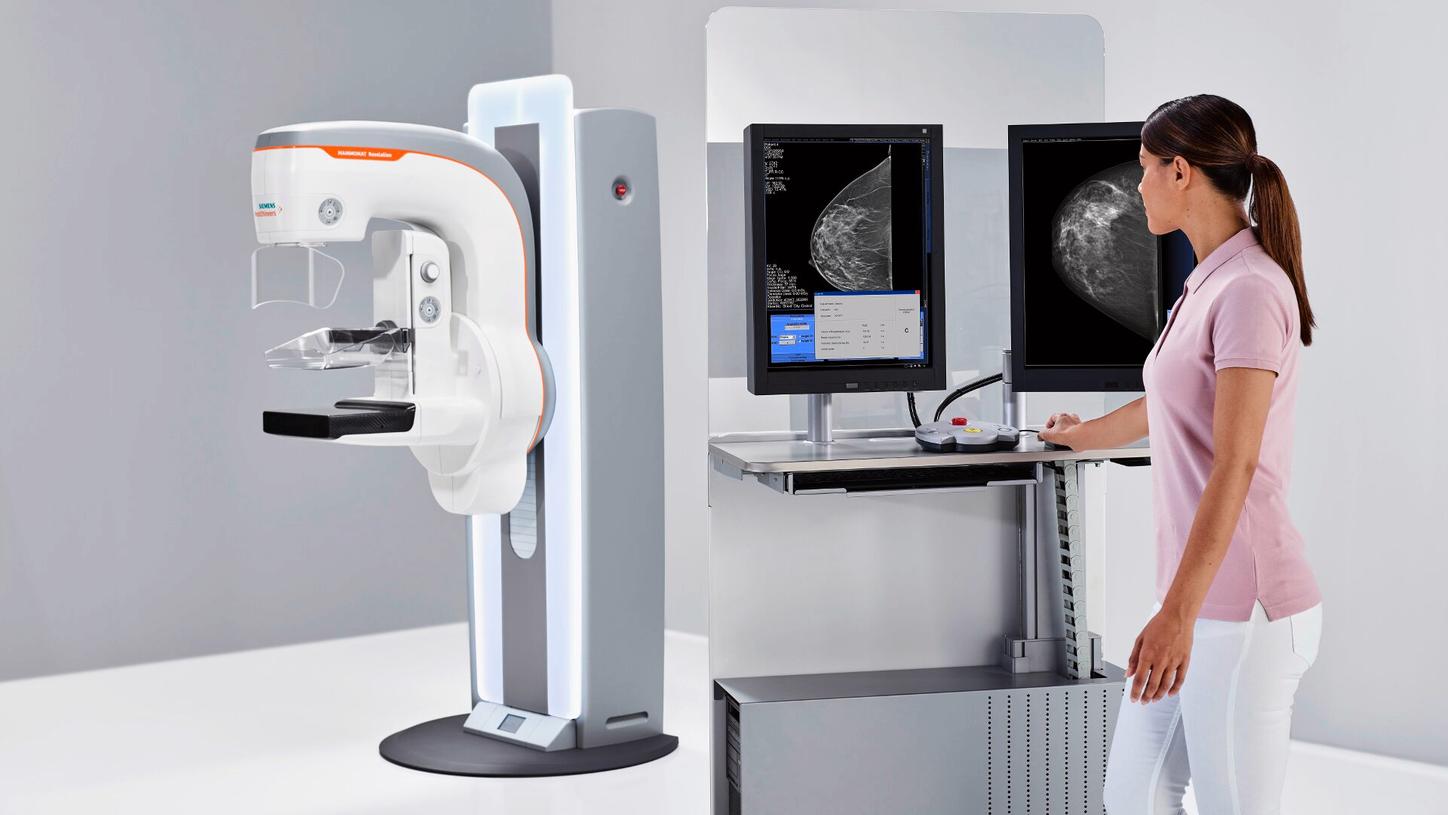 MAMMOMAT Revelation from Siemens Healthineers is the first system to determine breast density automatically. The 50 degree wide-angle is the base for excellent quality 3D-images of the breast to take more targeted and accurate biopsies. The "InSpect" function of the system also improves the biopsy workflow. After the tissue sample has been taken, it can be controlled directly at the system.

Based on our first MAMMOMAT, our company went on to shape the field of mammography by developing a whole series of new technologies. Over time, increasing automation and digitalization have influenced almost every aspect of the MAMMOMAT family. In addition to the development of major milestones such as tomosynthesis, which has allowed three-dimensional imaging of the breast since 2009, we also engage in numerous initiatives aimed at informing people about the importance of early detection. Some 45 years after Philip Strax first screened women for breast cancer during their lunch breaks in a van in Manhattan, there are now “mammomobiles” out and about in several countries around the world. These mobile mammography units incorporate a small but fully functional examination room equipped with a Mammomat Inspiration. With the introduction of the mammomobiles in 2008, Siemens hoped to give women in rural areas the opportunity to learn about breast cancer and to be examined there and then if they wished.

Between October 2011 and October 2012, a campaign entitled “Turn your city pink! Raise awareness for breast cancer” saw participants in 76 countries produce thousands of photos and videos with a view to disseminating the central idea of the campaign in the most creative and public ways possible. The aim of the initiative was to encourage people around the world to engage with the topic of early detection and to join the campaign themselves.

Did this information help you?